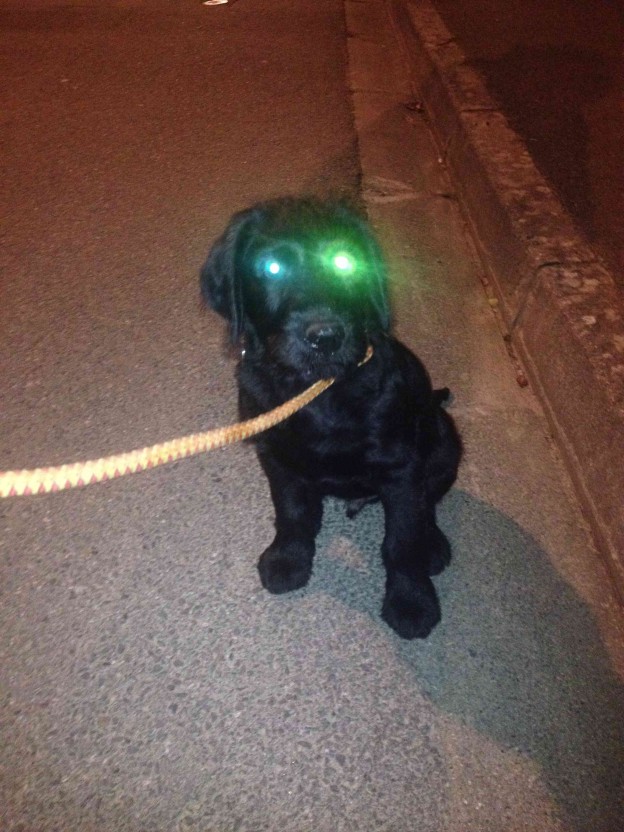 Ha! Told you he pooped in the gutter! Look closely, you won’t find that kind of quality photography anywhere else 😉 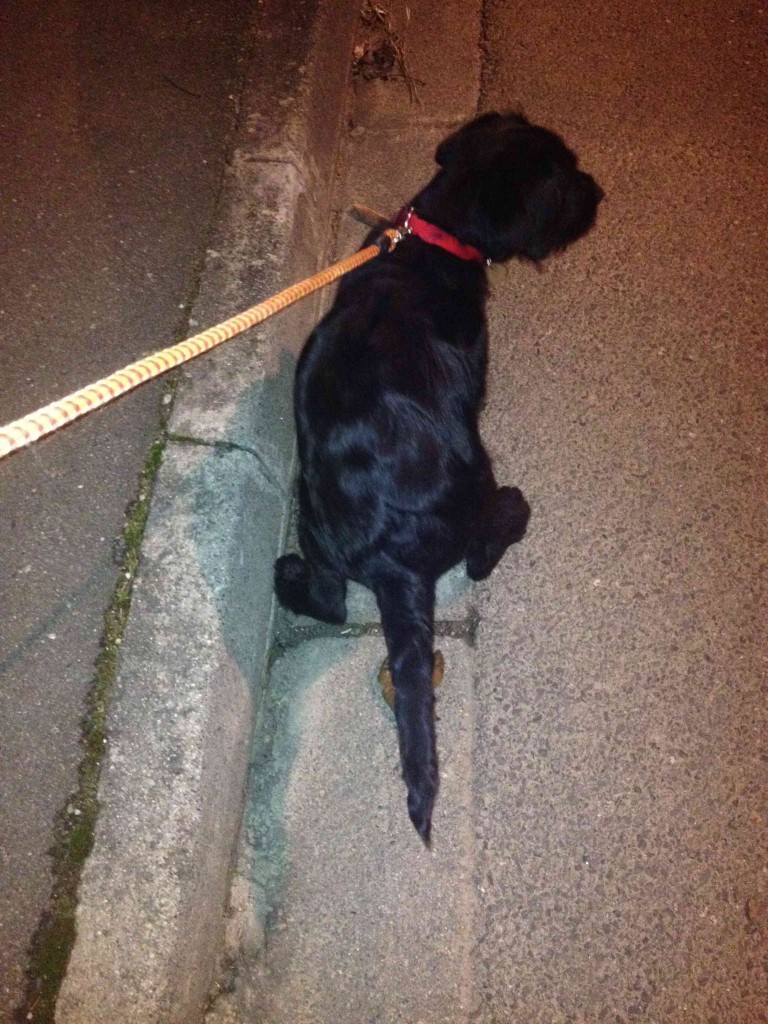 And yes, that dog’s an alien. I love him anyway 🙂 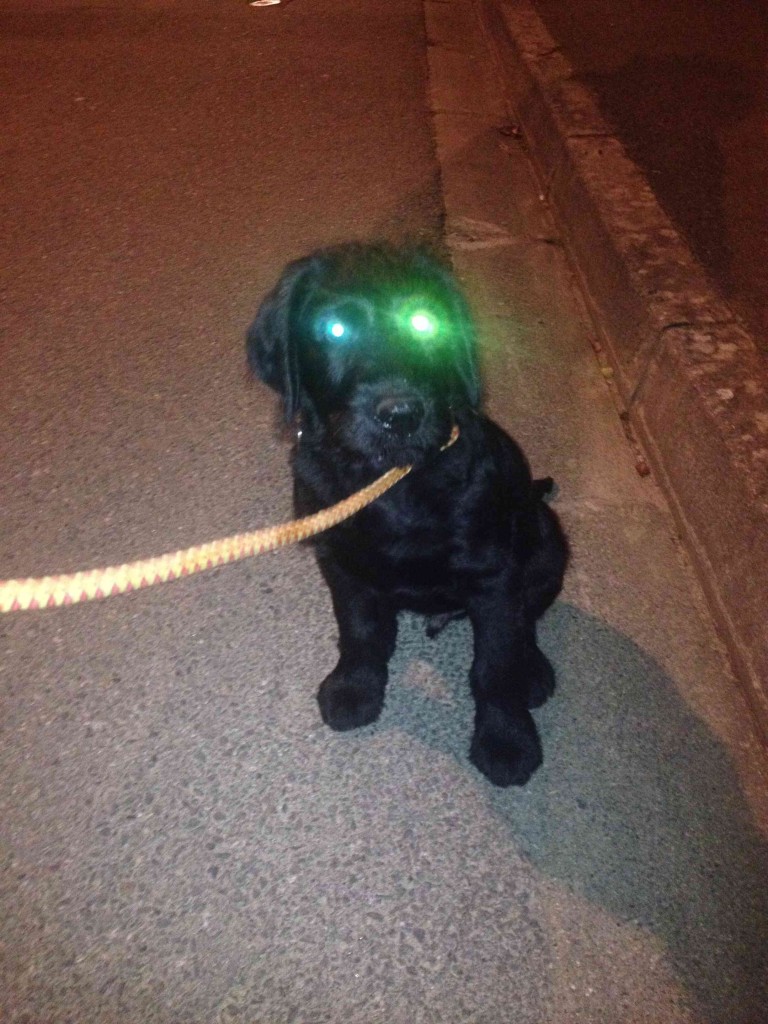 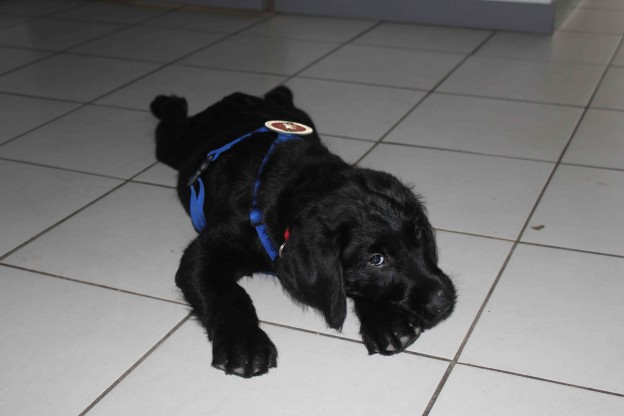 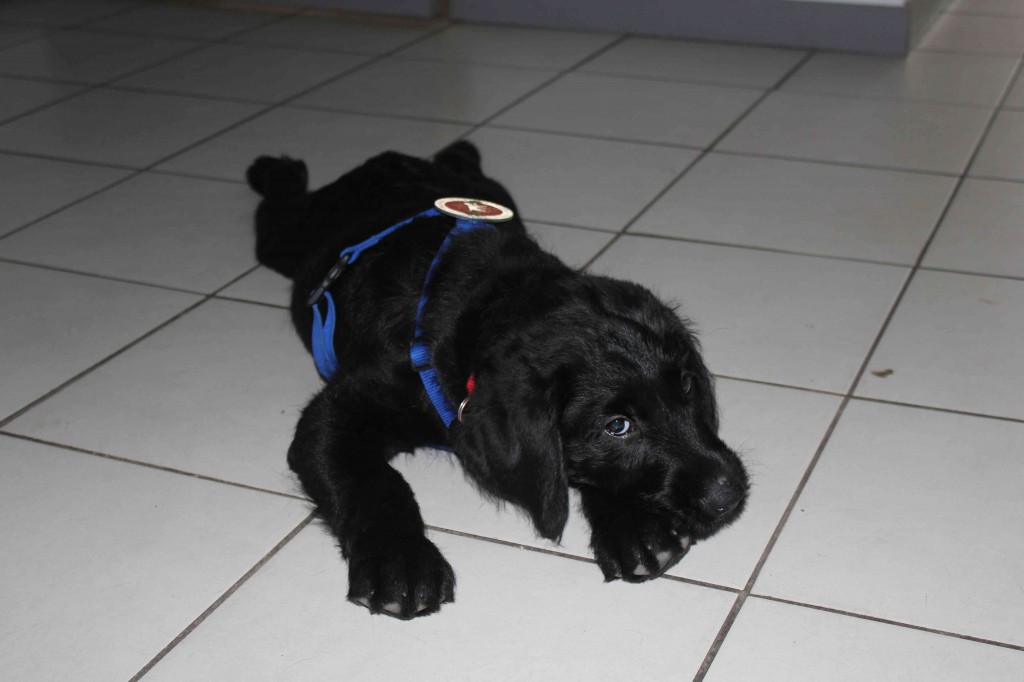 Potty training is a big thing for a service dog. These dogs need to be 100% trustworthy when it comes to holding it while in stores, airplanes, restaurants, while their person is at work or at school, etc. They must learn to go on command whenever their person can give them a potty break. Guide dog must know how to go potty on leash which most dogs despise because they like to roam around to find a good spot, right? A guide dog cannot do that most of the time.

A guide dog for the blind must learn to go in the gutter so that their blind handler doesn’t have to pickup. Makes sense, right? Don’t ask a blind person to pick up dog poop, that’s a recipe for disaster. He must also learn to do his business quickly because the blind person cannot walk them all over the place looking for the ideal potty spot. Would you let your dog roam looking for the « perfect spot » if you had to do it with your eyes closed? No way! AND, get this: male dogs must never lift their leg so there is no chance that they’ll pee on their person or on something valuable that the handler cannot see. Oh my!

Potty training falls mostly on the family that raises the pup, this is one area that I’m going to have to get 100% as well. Today I’m here to report that we’re off to a good start. 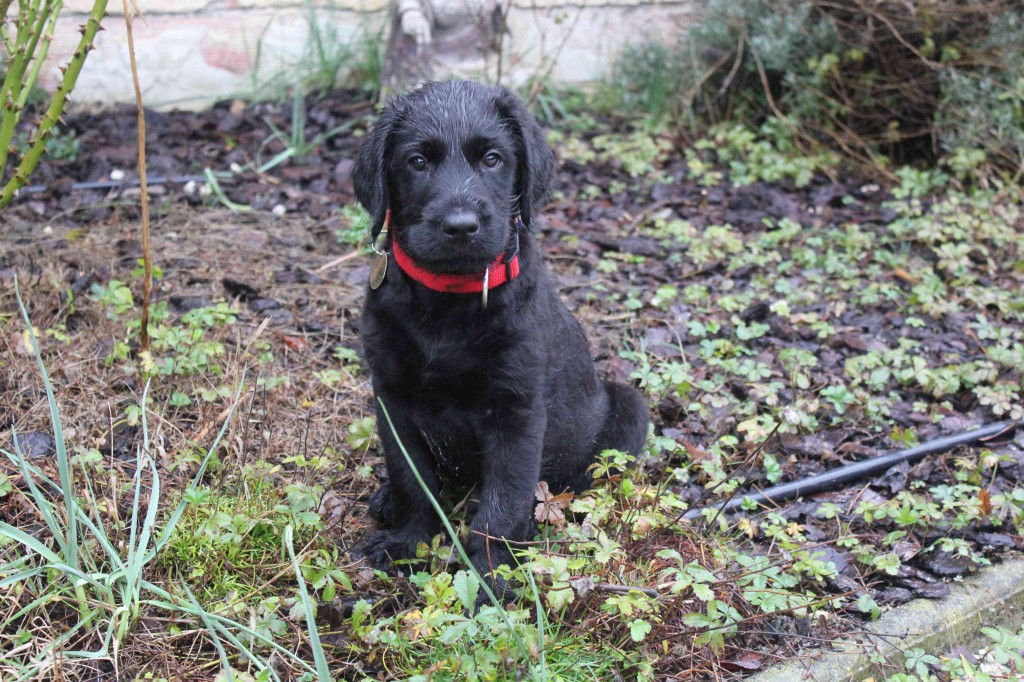 I had been told about the gutter thing, as a matter of fact the Toulouse Guide Dog school puts it right in the initial application and it’s one of the first things the trainer mentioned during our first phone call. We live at the end of a private dirt path, the nearest gutter is 50 yards away, so that was a concern. The trainer said it’s easy: when you get the pup out of his kennel in the morning, carry him all the way to the gutter, place him in the gutter and encourage him to do his business there. He’ll pee first, and then will poop soon after, but sometimes it takes a few minutes. Do not let the dog get out of the gutter until both businesses have been done.

The implementation was difficult at first. It rained non-stop the first few days Igor was with us, the gutter was full of fast-running water. So I did the next best thing: I made him do his business a cemented area right by the gutter, yet not the sidewalk. It’s a spot where I have to pick-up, but I don’t mind. So for about 2 weeks Igor did his first business of the day on that cemented area and I thought we were doing fine so long as it wasn’t grass. I was wrong.

At our second follow-up with his actual trainer Laetitia (we hadn’t worked with her yet because she was away placing a fully trained dog with a blind person) she told me that cemented area wouldn’t do. He HAS to learn the gutter, not cement nearby, not gravel, gutter. She would crate him until he did his business in the gutter when he’s with her. Dang that’s harsh, but she’s right, and she’s in charge. I have to change Igor’s mind about the gutter.

I normally get up at 6:15 to fix Marianne breakfast before she takes the bus to school. To accommodate Igor’s potty training I set the alarm for 6:00 and spent 15 minutes walking him along his cemented area, but I don’t want to stay out there any longer than I have to, honestly I feel like a fool half way dressed with my dog pooping on cement when we have a perfectly good yard!–so I always rushed through it. Laetitia said you can’t do that at the beginning. Take the time, make him stay in the gutter until he goes. If he pees but doesn’t poop, bring him back to the house in your arms, crate him with his food and water, and give him another chance an hour later. Don’t let him do his first pee and poop of the day anywhere but in the gutter no matter how long it takes. She said he’d cry and fuss because he’s used to the cemented area by now, but don’t mind him, short leash, gutter.

And today that’s exactly what I did! It’s Saturday morning, I have more time, so we’re on Igor! Laetitia was right, he did cry, he really wanted to go back to the cemented area, jumped out of the gutter many times, but I put him back, then he peed within 2 minutes, and 5 minutes later he pooped IN THE GUTTER!!! I praised his so much and so loudly I probably woke up some neighbors, but I don’t care 🙂

You’re probably going to ask can he EVER go in the grass like a normal dog? Yes, but not the first business of the day. The rest of the time he can go where he likes. We don’t know where he is going to live eventually, country, maybe city, he has to do either easily and on command. How will I train him to not lift his leg? I have no idea. Laetitia said that’s why we nutter them at 7 months on the dot. She’ll explain more I’m sure. How am I going to do this when Igor gets too big to carry? Leatitia says carry him as far as you can, then put him down and run the rest of the way to the gutter. OK, that’ll be a spectacle all in itself, but I’m game.

But for today I have to say I’m so proud of Igor! He’s going to be the biggest, baddest guide dog ever! Here he is with his litter mate India and an older guide dog in training. 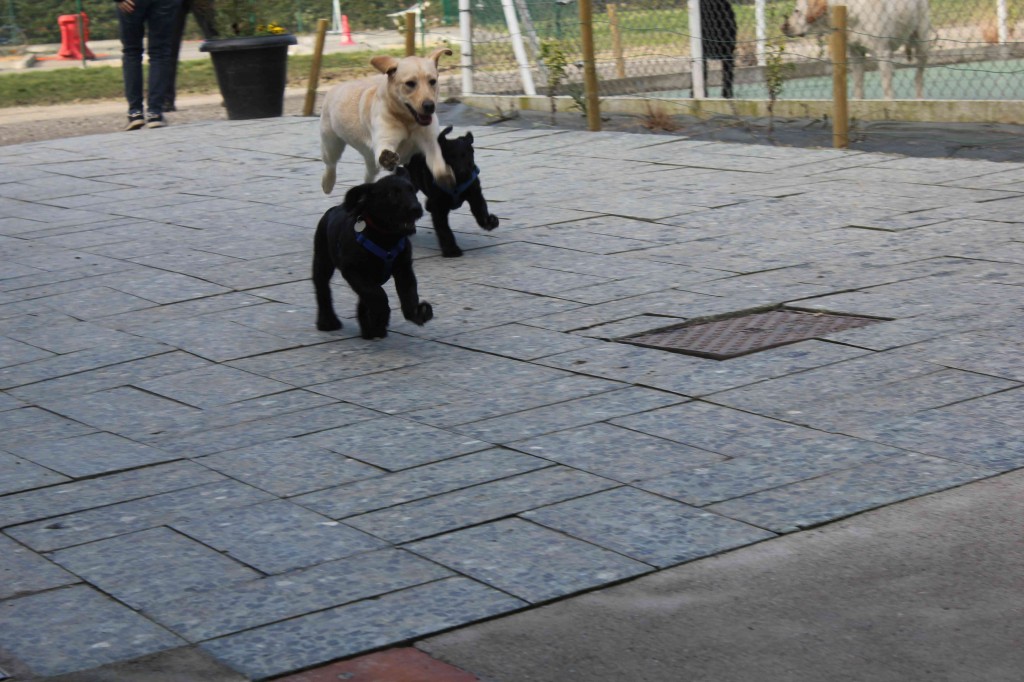